The CHCCS decision to cancel all international student trips this spring was announced in early March. For many middle and high school students, the canceled trips represented months of preparation and the nurturing of long-held dreams. Robin McMahon’s French students at Smith Middle School (SMS) and Chapel Hill High School (CHHS) were among the disappointed world language learners, not because they were losing out on international travel, but because they were scheduled to host more than 30 students from Belgium after spring break. They were all looking forward to spending a week sharing their lives with the pen pals they’d been communicating with for months.

McMahon has led exchanges with Saint-Benoit Saint-Servais in Liège, Belgium since 2001. In 2009, WUNC TV produced an hour long program that followed McMahon and her students on their trip to Belgium. This year would have marked the nineteenth exchange, but with schools closed in North Carolina, as well as Belgium, she knew there would be no sudden reversals of the unfortunate situation.

Most of the pen pal matches were created in early 2018 and SMS students stayed with their pen pals for a week in 2019 in Liège. 2020 was the Belgians'  turn to see life on this side of the Atlantic.

The veteran French teacher, McMahon, typifies “Can-do” spirit, however, so she was soon at work, organizing an opportunity for her students to connect with their Belgian pen pals. On May 1, both sets of students spent the morning (EST) communicating over Google Meet, introducing themselves and then moving into virtual breakout groups to discuss the impact from COVID-19 in their respective communities.

McMahon admitted she was nervous about potential tech glitches, but Connie Wolf, the SMS Information Technology Facilitator (ITF) set up the process. “The Belgian teachers who had hosted our teachers last April joined the meet 15 minutes early,” McMahon said, “and this quiet virtual space was filled with laughter and stories as both sets of teachers shared a common experience.”

“And then came the unique voices of sixty-five Belgian and American children introducing themselves and each other; their voices timid at first becoming more confident with each introduction,” McMahon wrote in an email. “Belgian students were speaking English; my students were speaking French. The Belgian teacher-leader, Pierre-Yves Vanvinkenroye, and I knew it was critical for our students to connect face-to-face in order to share the unprecedented experience of a quarantine, remote learning, and how to maintain a friendship.”

The six hour time difference was initially apparent in the demeanor of the students. More than a few American students looked a little dazed and bed-headed as they began to wake up more fully during the first minutes of the session. The Belgian students were well into their afternoons, revealed by their lively expressions and giggles.

In groups of 12 students, with an American and a Belgian teacher in attendance, the pen pals gathered in break-out sessions to discuss life during the pandemic, remote learning and how they try to stay healthy. “Most importantly they discussed how to stay in contact until they see each other next spring, when the Belgian students arrive in Chapel Hill,” McMahon said.

The teachers had prepared a list of questions, ranging from “What is your morning routine during the week?” to “What do you do to distract yourself?” and “What is something good you will remember about being in quarantine in five years?” For their discussion about wellness and self-care, students referred to questions like “What do you do for physical exercise?” and “How are you reaching out or helping someone else?” They talked about wearing masks, changes in buying and eating food and how often they go outside.

Gabe Grana, SMS Media Specialist, had accompanied McMahon and her students to Belgium in 2019. He was one of the 77 people on Google Meet that morning. “It took us being forced apart to find creative ways to come together, and this event symbolized that in a profound way. What a profound new common experience to share, one that transcends language,” Grana said.

Leo Robinson, a former SMS student who’s now at CHHS, was part of the session on May 1. “I’m going to text my pen pal a lot more,” Robinson said. “It’s important to maintain this friendship so that we know we’re not alone, even when it feels like it’s us versus the world.”

Katie Hinkle, an SMS student, is pen pals with Fanny Dembour. “Fanny and I stay in contact by using direct messages on Instagram, following each other on social media, sending pictures, and hopefully Zooming soon,” Hinkle said. “It is really important to stay in contact over this next year because staying tuned in with each other's lives will help build our friendship. It is also really important to check in during these times and see how the pandemic is effecting her and her family.”

What begins as a French class assignment often proceeds to much more. The pen pal relationships built and reinforced from year to year sometimes last long after SMS students have graduated from high school. McMahon said, “Once the students are matched with a pen pal in seventh grade, they have to hand-write their first letter to each other and then the communication becomes voluntary, with the understanding that their opportunity to travel on the Belgian Exchange in eighth or ninth grade partially depends on their motivation to create a friendship. Over the years, I have gotten at least 40 emails from students who ‘go back to Belgium’ to see their pen pals.”

McMahon said of the virtual gathering, “ The warmth of friendship and the promise of staying in contact turned a ‘cold’ virtual space into one of joy and hope, and the tears shed last March at having to cancel the exchange turned into smiles and discussions of how they will stay in contact until their arrival next spring.” 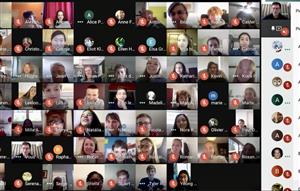