At 7:30 Wednesday morning on August 24, the CHCCS Family Engagement bus pulled out of the Lincoln Center parking lot headed for a heartwarming HEARTcoming bus tour, a rolling convocation at all 20 district schools. On board were Superintendent Nyah Hamlett, Board of Education Chair Deon Temne, Chief Communications Officer Andy Jenks (keeper of the air horns!) and a communications team to document this first ever experiment and adventure in remaking the traditional all-district convocation. Thinking (and acting) differently in real time, just like the new Strategic Plan promises!

The plan for the bus tour came to life only the week before, when the CHCCS leadership team asked, “How do we bring joy to our staff? We’ve got a beautiful bus, decorated by our own students - why not a mobile convocation?” The goals were to provide a time for messaging and celebration in ways that were efficient, less stressful for staff - and more personal. 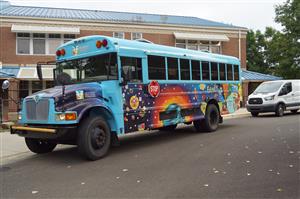 The first stop was FPG Bilingüe, where the staff held up colorful hand drawn posters that spelled out “Orgullo” (pride) and cheered as Temne stepped off the bus waving an FPGB sign over his head, with Hamlett right behind him on the bullhorn. Principal Karen Galassi-Ferrer noted the 10 different designs of tee shirts worn by staff, celebrating the 10 year anniversary of FPG Bilingüe as the first CHCCS full dual-language school. The staff sang “Cancion Orgullo Bilingüe,” a song of pride with the refrain, “Yo tengo orgullo/I am bilingual/yo soy bilingüe.” Before the bus departed, all the staff received swag bags with Strategic Plan publications, a heart-shaped fan and a towel - also with the Strategic Plan’s title of “Think (and act) differently” with the addition for staff of “Starts with the heart - heartwork.” Local companies also donated various items. 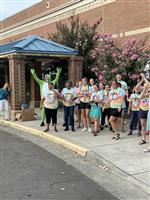 At Mary Scroggs Elementary, the entire staff was decked out in their tie-dyed pastel tee shirts, except for Assistant Principal Brian Tyson in his frog onesie, performing an original, hilarious rap (not bad for an amphibian administrator!) The Culbreth staff brought their energy and cheers alongside their dancing Cougar mascot, with new Principal Lucas Paulsen in his blue and gold Culbreth sneakers tapping along. “Cougar Pride, amplified!”

The front sidewalk of Carrboro High School revealed a sea of purple (Go Jaguars!), and when the bus eased around the circle, a number of staff rushed at the windows, encircling like frenzied Beatles’ fans, arms waving and their cheers competing with Jenks’ air horns. Principal Beverly Rudolph and Assistant Principals Diego Mureno and Ileana Herrera all wore purple wigs, and Rudolph led her staff in a revised and robust version of Coldplay’s “A Sky Full of Stars,” belting out “‘cause you’re a sky full of stars, and you give kids your hearts” (instead of “I’m gonna give you my heart.”)

The staff at the Hospital School might be tiny compared to the other schools, but they are a tightly bonded team led by Principal Marny Ruben, who welcomed the bus in a half-hidden turnaround across from the hospital complex. Staff shook blue pom poms and displayed their own banner that says, “School in the hospital is an implicit statement of hope.” 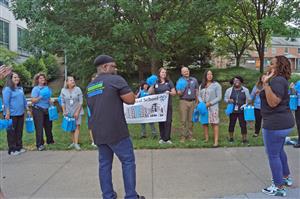 The Glenwood Gator hopped around to the sound of tambourines and plenty of laughter from the staff. Principal Channing Bennett took to the bullhorn to spotlight the fact that the school is welcoming 16 new staff members as they implement “innovative ways to engage our stakeholders and make sure our kids feel safe in their environment.” Then on to Rashkis Elementary, where a big purple Raptor waved its arms as the bus appeared. Principal Tiffany Newsome led a call and response chant that inspired Chair Temne to call out, “Energy - this is what we do!” 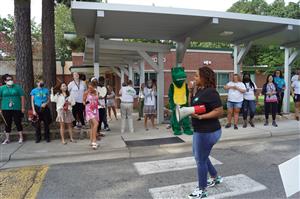 The Roadrunners at Ephesus Elementary were so outlandishly decked out in red and shining accessories, there were more than a few cars on the road that slowed as they drove by. School counselor Ashley Sherman took on the role of Ringleader in Chief in her shimmering red cape, rainbow knee socks and red tutu. Many among the staff chose “statement outfits,” wearing boas, spangles and robot heads. Sherman made sure to shout out the fiftieth birthday announcement for Ephesus, as the staff danced a “soul train line” from the building entrance.

Given the major traffic obstacles on Estes Drive, the staff at Estes Hills generously agreed to walk over to Phillips Middle School, so their mini-convocation was combined. The staff from Phillips rocked their green tee shirts and bright green pom poms, while those from Estes Hills waved giant green and yellow flowers and balloons.

On to East Chapel Hill High School, through the neighborhoods around Lake Forest, navigated by the expert and unflappable CHCCS Lead Bus Driver, Patti Reid. In addition to the East staff gathered on the front lawn, another 100 or more staff from other schools were attending professional development there, so the Wildcats had to carve out an area apart to hear the message of encouragement and gratitude from Hamlett and Temne. However, new Principal Jesse Casey took the bullhorn and reminded his team that their theme this year is “Love, respect and stay connected!”

Before departing the high school campus, current North Carolina Central District Teacher of the Year, and East social studies teacher, Brian Link joined the bus tour, and his wellspring of positivity and energy helped stoke afterburners for the rest of the day. Link can definitely raise the temperature! 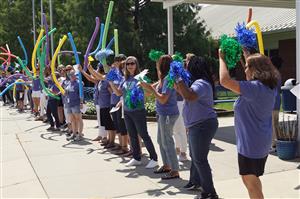 The Morris Grove Geckos were waving colorful foam noodles to greet the bus, and their roars of welcome provided a perfect reminder of what this HEARTcoming experience was all about. Link bounced off the bus and delivered high fives to as many people as he could reach, before Hamlett noted that the visit was a time to “center Joy.” Kindergarten teacher Adam Glasser led an impromptu cheer and then the entire staff did the Wave.

Next up, Chapel Hill High School, where Link summoned his longtime colleague, CHCCS Teacher of the Year, English department chair, Kim Jones, who delivered words of inspiration and motivation. Principal Charles Blanchard’s message was simple and straightforward. Standing in front of his staff, he said, “My joy is right in front of me, and the rest of the joy arrives on Monday.”

Next door, a 30 second bus ride away, the Smith Middle School Cyclones had already been rehearsing a performance to show off their talents and creativity. As soon as the bus parked, the music cranked up, and after Hamlett, Temne and Link all delivered their messages, the black tee-shirted staff jumped into an epic performance of “Uptown Funk” that soon had everyone from the bus tour showcasing their own moves. “Ebullient” doesn’t half capture that Cyclone dance number! 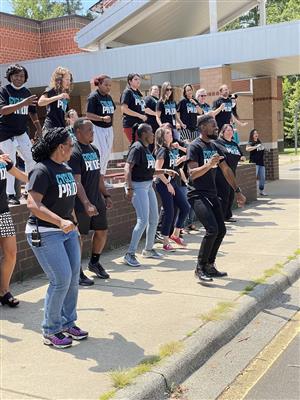 Six more schools left to visit after the Cyclone spark at Smith - it was time to roll on to Seawell Elementary School, where the staff had gathered at the bus circle and shared their chant, “We don’t break the rules, we increase the peace. Seawell School is the place and we know it well!”

At McDougle Middle School, their staff brought the red - and the mustangs! As the bus pulled in, one staff member galloped alongside on a hobby horse, and not one but two mascot mustangs shimmied and jived in the afternoon heat. (Those morning CHCCS mascots sure had a better deal!) New Principal Christopher Horne looked to be in his element already, a solid rapport with his staff reflected in his brief remarks. The McDougle Middle crowd had to lean in to catch some of the messages from Hamlett, Temne and their principal because the blue-shirted staff next door at McDougle Elementary was raucous and maybe impatient!

New Principal Kirtisha Jones looked like she was choreographing a stage production or parade, arms waving and her principal voice raised loud. The variety of stuffed marine life was amazing, plush dolphins of all sizes in teachers’ arms, and two bouncing (staff) penguins who looked like an Arctic version of Tweedle Dee and Tweedle Dum. There was a lot of laughter and chanting and even the occasional guitar chords for dramatic flair. Yet another school that totally understands how to generate and elevate Joy! 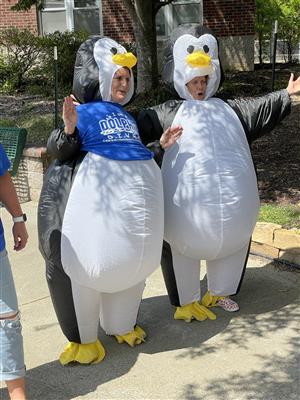 One more elementary school to go, before the bus could return to “homebase” at Lincoln Center and Phoenix Academy High School. The Northside Navigators had put in a full workday at their school when the HEARTcomers arrived, but they had as much energy and spirit as any other team during the long day. As many admirers have noted on social media, those Navigators were on fire, and their rocking enthusiasm propelled Hamlett, Temne and Link to another level, too. Principal Coretta Sharpless led a foot stomping chant, “Northside is red hot, Northside is red hot,” and the entire group of Navigators around her swayed and stomped and clapped. Absolutely, they brought the JOY.

The occupants of the beautiful Family Engagement bus might have been a little bedraggled by the time they stepped onto pavement for that final visit to Lincoln Center and Phoenix Academy High School. After all, it was after 3:30, and the bus had been on the road for eight hours! But the combined staff were waiting and poised to share their Electric Slide moves, taking a few selfies and generating a lot of End of Day smiles.

The day was packed, inspiring and filled with fun. It was definitely a HEARTwarming HEARTcoming for the folks on the bus, and hopefully for most of the hundreds of extraordinary staff who assembled, performed, listened and then helped bring it home! 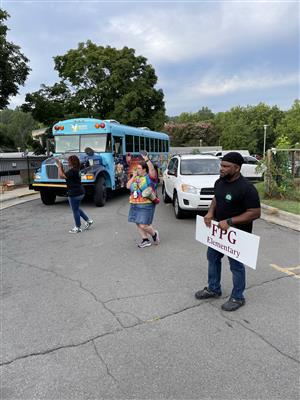 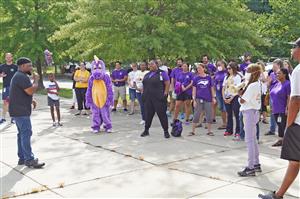 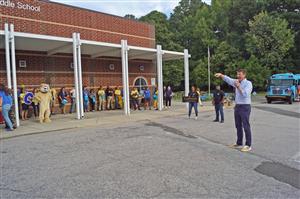 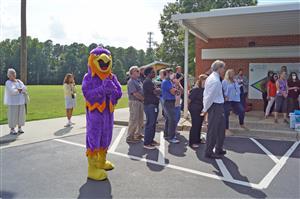 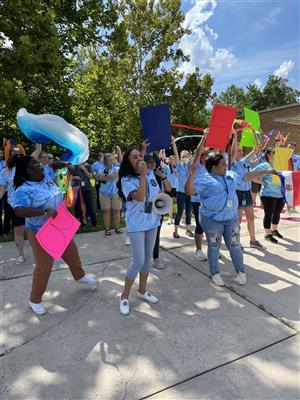 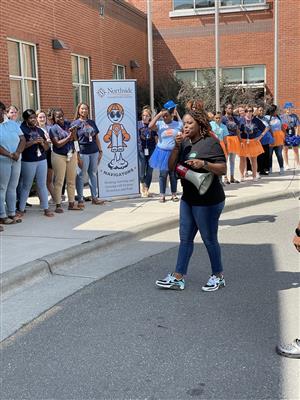 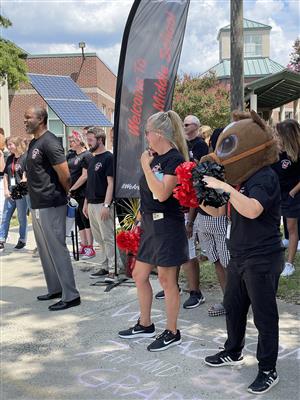 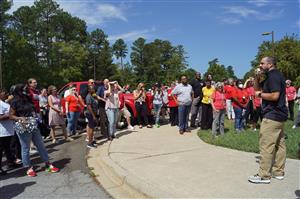