When students at Mary Scroggs Elementary School (MSES) finally reach the fifth grade, many of them have been counting the years, months and days, until they can join the magical hallways of Scroggwarts. The fifth grade team at MSES led a presentation to the School Board in 2018 to explain the power and energy of Scroggwarts, an approach to curriculum that infuses music, movement and “magic” at every turn.

At a Board meeting the following year,  Fifth Grade Teacher, Jasmine Johnson, returned to present on the integration of Augmented and Virtual Reality (AR/VR) into many of their Scroggswarts classroom activities. Much of the creative technology used to build and maintain peak student engagement has been funded by the Public School Foundation (PSF).

For readers who are not digital natives, basic acronyms like AR and VR may not provide much clarity. When Johnson begins to talk about the students’ use of Oculus headsets and Merge Cubes, the familiar classroom supply lists of markers, pencils and notebooks might as well be from Ancient Times. Johnson and her fifth grade colleagues are often learning how to extend and explore the VR/AR technology along with their students.

“Research consistently proves that when students are highly engaged during the learning process, they are much more likely to grow academically, socially, and emotionally,” Johnson said. “During remote and blended learning, our team has worked extremely hard to keep our students' levels of engagement up, and with the help of initiatives funded by our community and the Public School Foundation, we're able to do just that.” The most recent PSF grant provided headsets, facemasks and other accessories, as well as a subscription to CoSpaces, that allows students to build in 3D and use coding and advanced scripting. 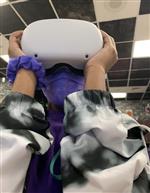 “Right now we are researching biomes and the kiddos are writing a paper, and they have the chance to use the VR technology to really see what the tundra is like, for instance,” Johnson said. “We have been truly immersing students in the content and skills they're studying with our newest additions of VR/AR technology. Thanks to our recent upgrade to Oculus Quest technology, they were even transported to the terrestrial and aquatic biomes we're currently researching in the classroom. Students had the opportunity to roam the grasslands of Africa, dive into the Raja Ampat coral reef, and explore the Borneo tropical rainforest last week alone.”

One of the most popular projects has been in English Language Arts as students designed characters’ bedrooms. “Students were able to actually hold the bedrooms they designed to reflect the personalities of characters by choosing items to show hobbies, but also symbolism to reveal those characters.”

Now that many of the fifth grade students are back in their classrooms, there’s more frequent access to the VR headsets, which are now interactive for EOG review. Johnson said students have developed practice exercises by making mazes. “We’re coding the walls so when you bump into one a question pops up, and you can either move forward or you have to go back- it makes reviewing not so monotonous or mundane,” Johnson said.

The fifth grade team development of Scroggswarts broke the mold of “traditional instruction, as the teachers continue to enhance the philosophy of offering music, movement and magic as tools to keep their students motivated, wanting to succeed and ready to try more difficult tasks.

“We look forward to continuing and expanding out #ARVRinScroggwarts initiative for years to come!” Johnson said.