The Black History Month event lasted all day on February 28 at Seawell Elementary School (SES), and some aspects of the celebration were distinctive in their focus. The kick-off assembly may have been similar to other schools’ gatherings, but the student-created, cardboard reproductions of Chapel Hill-Carrboro black-owned businesses was a unique art and social studies collaboration, first envisioned nearly a year ago by Fifth Grade Teacher, Julie Halpert and Media Specialist, Laura Nolan.

Nolan said, “After Julie and I coordinated interviews last year with local members of our black community, we got inspired. We wanted to do something different that really highlighted not just Black history but ’Our Black History in Chapel Hill/Carrboro.’ After speaking with our in-school stakeholders, our Administration, and the Equity team, we decided to try something student-led, student-created, and focused on our local community.”

By 9:30 on the 28th, all classes were seated in designated spaces on the floor of the cafeteria. The event opened with a rousing performance of “Lift Every Voice and Sing” by all the first graders and led by First Grade Teacher, Rhonda Coleman. Then, for nearly an hour, students and staff listened to personal histories and recollections from several life-long members of the community. Executive Director of Equity and Inclusion, Lee Williams, served as emcee and he kept the energy crackling.

David Mason has often spoken at CHCCS events through the years. As one of the most active members of the alumni group from Lincoln High School (LHS), Mason has filled an important role of local historian and advocate for the preservation of both artifacts and archives from the single African American high school in the community. Mason graduated from LHS in 1961.

Kenny Mann attended Carrboro Elementary School (CES), and he told his audience that he was one of three black students to begin the slow integration process of Chapel Hill-Carrboro City Schools. As students listened quietly, Mann described how he began his first day at CES in 1963 with “every law enforcement officer in the area out in force.” Mann said he didn’t think he could even get inside the building, “but once we were inside the school, we were all getting along fine.” He added that some of those students from second grade are still his best friends.

For most of his childhood and adolescence, Mann dreamed of being a star football player for Lincoln High. But in 1966, LHS closed and with it, the uniforms of orange jerseys and black pants disappeared, too. Mann said even as his dream continued, every teacher he had encouraged him to pursue music. “Teachers will see something in you that you don’t see in yourself.” Over 40 years in the Southeast, Kenny Mann and his band Liquid Pleasure have been a powerhouse mainstay in the fraternity circuit and for weddings.

Spring Council is one of the eight children of Mildred Council, or Mama Dip as she was known for decades. Council told the audience about how her mother came to be known as “Dip” as a child; she was so tall she was one of the only ones who could reach into the rain barrel and dip out drinks of water for her family. Council said her mother began cooking at the age of nine. With her many gifts as a Southern cook, as well as a savvy and instinctive businesswoman, she built a national reputation with her restaurant on Rosemary Street, Mama Dip’s.

Another speaker, Liz Mason Carter, has maintained an equally prominent profile in the community, having served as a CHCCS School Board Member, Vice-Chair and Chair for 13 years. When she retired from that civic role, the Orange County Board of Commissioners offered a resolution recognizing her many gifts, from serving as a “persistent and impassioned voice for Chapel Hill and Carrboro families not normally heard” and being a “beacon of excellence and equity for all students.”

Carter also spent her childhood dreaming about the day she could attend LHS. “I always loved being part of events at our black schools,” she said. But like Mann, Carter attended Chapel Hill High School instead and graduated in 1973. Besides her service on the CHCCS School Board, Carter has worked with many local youth organizations. “My calling has always been advocating for young people.”

Carter’s son, Rodney Carter, spoke briefly about growing up in the community. He is now the men’s basketball coach at CHHS. His son, Dylan, is currently a student at SES and he came up to share a few words with his family. “I like school a lot. I want to go to Chapel Hill High and be a better player than my Dad.”

When the assembly had ended, classes began taking turns, visiting the gym to browse the cardboard replicas of businesses with their poster displays. Some of the displays featured the business owners themselves. A number of older students, including members of the very active Student Council, took turns acting as guides through the town.  Nolan said, “Various students throughout the day assisted in this role. It was very organic.” They greeted children as they entered the gym and helped them navigate "the roads of Chapel Hill," which were represented by student-created street markers and lines and arrows taped to the gym floor. 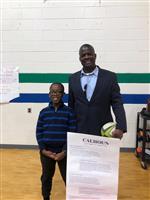 What had started as Halpert's initial idea of a town walk-through soon became a reality through the vision of Seawell Art Teacher, Stephanie Reid. Students worked with Reid to complete the replicas in art class, and student council members created posters before school. Staff members took on the task of reaching out to confirm local business owners' representation, with particular support from Fifth Grade Teacher Assistant, Liz Davis, whose lifelong connections in Chapel Hill made many guest speakers possible.

Reid said, “We had a fantastic time getting this project together. Each grade level (K-5) was able to come into art each day during Black History Month and help 'Build Our Community'. Students spent a couple weeks just painting the boxes. Once painted, they made windows and doors for each box and added details on the outside of the buildings. We have wonderful parent volunteers at Seawell, and they came in to help make the business signs and add finishing touches towards the end of the project."

"It was really inspiring and gratifying to see while the students were building a physical representation of our community, they were also seeing how many businesses were started by African Americans in our town."

"Growing up in Chapel Hill, I am amazed each day with all of the changes we have seen over the years. This project gave us a chance to celebrate our town both past and present, as well as a way to highlight some very important African American community members. It was a joy to be a part of this project.”

This event and project was a true community collaboration!