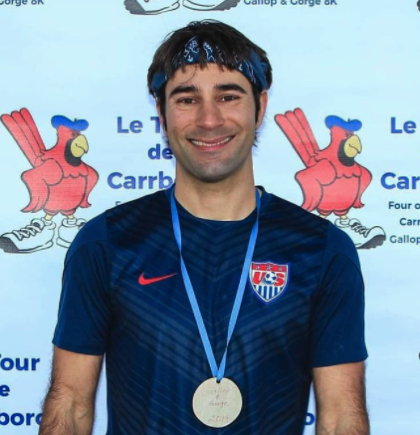 Mr. Straub earned his Bachelor's degree from the University of Mary Washington and completed his Master's Degree in School Counseling at Southern Connecticut State University, close to where he grew up.

Mr. Straub moved down to Chapel Hill with his wife and started at Culbreth in 2013… this is his 9th year!  He has a super lazy hound/beagle mix named Scout and recently had a baby boy named Aiden!  Mr. Straub loves running and racing, especially in the woods.  He also enjoys coaching (Go CXC!), traveling, fishing, playing music (mostly cello and guitar), watching Manchester United, playing soccer, eating wings (any flavor), cooking, reading, and gaming.

He became a school counselor to help kids figure out their lives.  Who do we want to be?  What do we want to achieve?  How do we do it?  When we make mistakes (like we all do), are we fixing them?  Middle school is messy… but it’s also exciting!  He loves working at CMS and being a part of all the goofy things that happen there.